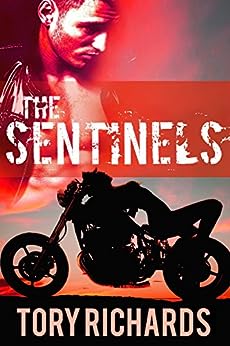 As the president of the Sentinels MC Tanner has his hands full. It’s Daytona Beach Bike Week and Daytona is his town. Then trouble by the name of Ruby rolls in, pretty, sassy, and with enough curves to tempt a saint. Well, Tanner isn’t a saint, and she’s his kind of gal, except his onetime only f**k rule isn’t for girls like Ruby. But then, rules are meant to be broken, aren’t they?

Tanner moved, slowly, placing his coffee cup down on the nearest surface and then turning leisurely back to me. “What did I warn you about the last time that you referred to me as a boy?”

I swallowed with difficulty, unable to take my gaze off his. Should I play stupid? I decided he’d probably see right through me. “Something about, uh, showing me the difference between boys and, uh, men?” I felt my heart rate pick up. I hadn’t intentionally brought up the earlier exchange, but now that I had, I was almost breathless with anticipation.

Would he kiss me? Throw me on the countertop and have his way with me? The predatory gleam in his eyes turned me on, and I felt a coil of heat unfold in my core, and felt the wet heat between my legs. “You’re not going to spank me, are you?” I teased, knowing that I was fanning the fire.

Tanner stopped abruptly, as if he’d come up against an invisible wall, and then I watched a purely evil-in-a-panty-melting-way grin quirk those full, sexy lips upward. “Now, that’s an interesting thought,” he grumbled in a low, tiger-like tone. “I was just going to throw you up against the wall and kiss you speechless.”

Oh! I puckered my lips into a pout of disappointment. Both retaliations sounded good as retribution. “Do I get to choose?”

Before I knew it he was walking me backwards against the wall. I caught my breath at the impact of the wall and his hard body at the same time. Powerful arms came up on either side of me, hands flat against the wall, entrapping me in the most delicious way. I swallowed, meeting Tanner’s fierce, narrowed gaze, which flickered back and forth between my eyes and my trembling mouth.

“No,” he said simply, firmly, before closing the distance between us and slamming his mouth down onto mine.

Wildfire was the first thing that came to my mind as his lips met mine, something raw and untamed hammered through my blood the second we touched. In a flash we both lost control. It wasn’t just about a kiss. No, that word was too simple to place on the vital, mind-blowing something that was happening between us. The man knew how to kiss, and he used his mouth to claim more than just my lips. He was taking me, body and soul, and I was a willing submissive. I opened my mouth and took him inside, moaning low as more warmth flooded between my legs.

His low, primal growl echoed through the kitchen as he thrust his tongue against mine in a rough, demanding way. His body crushed me against the wall in a way that made me very much aware of our physical differences, which was funny, considering that we fit together like a puzzle. My softness conformed to his hardness, and God he was hard. There was no disguising the hard ridge of his cock grinding against me, causing more liquid heat to rush through my blood at just the thought of what his impressive size would feel like inside me.

Fucking me into sweet oblivion.

I wanted to protest when he pulled back and our eyes locked. We were both breathing hard. Tanner’s face was taut with arousal, nostrils flaring and fire in his eyes, and I knew that he was seeing a similar reaction on my face. He wanted me as much as I wanted him, and yet he held back. I could feel him pulling away before he actually did it.

“Fuck,” he whispered sharply against my lips.

Yes, I thought, fuck me, but I knew that’s not what he’d meant. I flinched when he struck the wall beside my head with a fisted hand that revealed frustration. I resisted the urge to look and see if he’d put a hole in the plaster.

“Not going to happen.” His tone sounded so flat, so final, as if he’d made up his mind about something and was going to stick to it no matter what.

There were a lot of things I could think of to say to dissolve the suddenly uncomfortable situation, but I didn’t believe that he’d find my usual ploys funny. Besides, I had the feeling that Tanner was talking to himself. I could still feel his cock against my lower belly, throbbing like a trapped beast wanting to get free. I thrust against it instinctively, wishing I hadn’t because it ruined the moment between us. With dread I watched the haze of desire in his eyes fade to total clearness of where we were and what we’d been doing.

He stepped away from me, shook his head as if he was confused about something, and then ran his hands through his hair. It was on the tip of my tongue to ask Tanner what wasn’t going to happen, but my instincts told me that I already knew. Why push the knife in any deeper by having him say the words I didn’t want to hear? I’d never wanted a man as fast and as hard as I wanted him, heck, I’d never wanted to go all the way with anyone else before. But the emotions coursing through me now left me feeling vulnerable and rejected because he didn’t want me back with the same intensity.

One thought on “First Kiss: The Sentinels by Tory Richards”