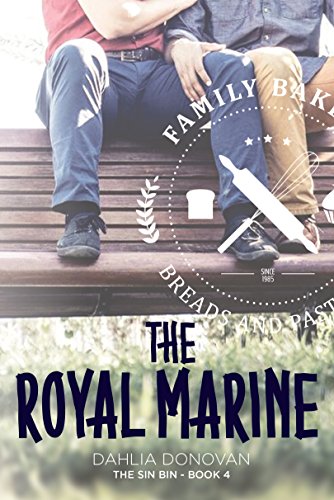 Who keeps the Royal Marine’s heart safe when he’s running headlong into danger?

Akash Robinson fuses his Indian and British heritage into his baked creations. His life is all things sugar and spice, especially when a blind date leads him to the older military man of his dreams. Family, friends, and an unwanted admirer all threaten both his sanity and his budding romance.

Hamish Ross carries the names of his lost soldiers on his back. He takes his work seriously with no time for love. All it takes is one impulsive kiss to lead him into uncharted romantic waters.

When a sarcastic baker mixes with a stoic alpha marine, who will come out on top when the flour settles?

“Can I give you a lift?” Hamish sounded as if he had no intention of taking no for an answer; he gave Akash hopeful smile. “I promise to get you home safely.”

“I’ve no doubt.” Akash shook his head, and laughed at the man. “Fine. I’d rather not try to find an Uber or something at this hour, and I have to be at the bakery early in the morning.”

On the whole, Akash usually handled silence relatively well. Working alone in his bakery, it never oppressed him as it did others, which made his inability to remain quiet while trapped in Hamish’s vehicle all the more surprising. Shut up. Shut up. SHUT. UP. God, I’m humiliating myself.

Blathering about the finer points of the spices he often used in his cooking didn’t exactly scream sexual seduction. The man driving brought out the chattering numpty in him—one he’d never known existed. He didn’t like it.

Hamish chuckled after several minutes, breaking Akash out of his thoughts. “Breathing would probably be a good thing.”

Akash covered his face with his hand and spoke with an embarrassed burble of laughter, “Yes, it just might.”

“You’re charming.” Hamish reached over to catch Akash by the wrist and drag his hand away from his face. “Completely charming.”

Akash directed Hamish toward the building that housed not only his bakery but his flat as well. “Thanks for the lift.” He glanced at the man out of the corner of his eye. “Fancy having supper with me some time?”

Did I just—I did. Bloody hell, I did.

Hamish’s midnight blue eyes searched his briefly before he reached out with calloused and scarred fingers to catch Akash’s jaw. “May I?”

“You could always try and find out.” Akash almost laughed in surprise when his own voice came out as steady as always. Those hard fingers rubbed against the scruff on his jaw, sending pleasurable waves along his skin. “Do you always need an invitation for a kiss?”

“Only the first one.” Hamish smiled wolfishly. His grin revealed identical dimples in his cheeks, though Akash lost sight when the man leant forward until their lips connected, awkwardly at first. Their kiss became heated quickly until they both pulled away, mouths open and breaths coming in quick gasps. He could hear Hamish swallowing a few times before he cleared his throat. “Sleep well.”

They exchanged numbers before Akash clambered out of the black Mercedes SUV. To his surprise he did manage to sleep well, dreaming of a sexy blond military man. It took the persistent nudging of his cat to drag him into waking up.

2 thoughts on “First Kiss: The Royal Marine by Dahlia Donovan”