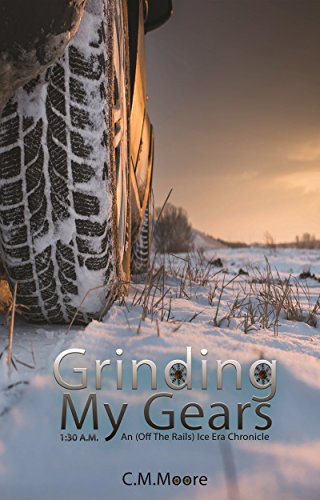 Adam, aka Gears, is a brilliant scientist, doctor and the creator of the water bases that all underground dwellers use to survive.

His family and friends would give him anything he desires. The world is at his feet. But for all his good fortune, the one thing Gears wants he can’t have. A long and healthy life.

As he faces his slowly worsening heart condition, he meets an unlikely savior in the form of Luna, a member of a rival organization known as The Originals.

Luna is part of a group that is out to see the destruction of everything that Gears has built. Even though she is connected to a world Gears can never be a part of, she risks her life to meet him and save him from death.

The two of them set off on a road trip that neither of them can evade, and have no idea if their journey will lead to a happily-ever-after or catastrophe.

Luna’s illogical ways has Gears questioning everything he thinks he knows about life and love. But she is his only hope for survival before the final beat of his heart.

“I don’t say ‘what’ a lot,” he mumbled. Blood rushed to his groin. It was time to get his head together. The head he used for thinking.

Gears picked up her blouse, hoping she’d put it back on. He held the garment out.

He felt like a shard of iron coming too close to an extremely powerful magnet. One step closer and he’d be drawn in.

She gripped both sides of her long skirt and yanked down. Heavens, that was not what he wanted her to do. The fabric fluttered then landed in a pile at her ankles. Standing before him, Luna looked like a Nordic goddess, pagan and untamed.

Gears thought for the second time that this must be a hoax. Looking back at the door, he presumed someone would burst in and yell, “Got ya!”

Gears glanced back at the exquisiteness of Luna while he still held her shirt. Her lightweight blue cotton bra complimented her eyes. Her underwear was the same shade of white-blonde as her hair. His eyes were glued to the fabric. Maybe it wasn’t that the fabric was light colored. On second thought, Gears had the idea that the underwear was sheer. Lace cuddled her thighs. What precious equilibrium he retained spun into infinity.

How long had he been gaping? He brought his eyes up to her face. She angled her head to the side like she was confused. No way did she get to be the one who was perplexed. He was the one who didn’t know what was happening. He was still holding out her top. He waved it back and forth.

“Luna…” he began, but she stepped out of her skirt and he forgot words existed. Once free of the dress, she kicked off her shoes. The sneakers bounced and landed near the bed.

“Make love to me.” The sentence was tossed at him like a bauble. She reached for the garment he still clutched. After she’d taken the item from his hand, she dropped it to the floor. “Don’t hold back.”

“What?” Good God, maybe he did say that a lot. He bent down to pick up her shirt again. He was shocked and flattered that she apparently wanted to have sex with him. He pushed up his glasses. Actually, he was more shocked that he was flattered at her proposition.

It was time to get his brain to turn on. Time to think. What should he do first? Get her dressed, or at least covered, so he’d stop panting.

He held her top out again. Luna crossed the small space between them. She took her shirt and once more tossed it to the floor.

“What?” Gears pushed up his glasses. “I mean, time for what?”

“Unleash your desire, my match. Let go of your emotions to free the power inside of you.” Luna kissed his cheek. “Connect with me and I’ll heal your heart.” Her hand lifted to his chest. “Can you feel it?”

Luna stared with hungry eyes. Gears had the feeling this was a now-or-never moment. As if she gave herself over to him for safekeeping. An unexplainable yet tremendous force inside of him demanded he accept her offer. Yes, he could feel it. The craving, the compulsion, the yearning was the most unscientific experience that had ever happened to him. This was a dangerous situation, like mixing hydrogen and oxygen then waiting for a spark.

He took a hasty step back.

Something silvery flickered in her eyes, as fast as a moving fish in a pool of water. Luna’s fingers went to a clasp at the front of her bra. The fabric dropped. Gears tried to hold in the lust, but for the first time in his life, he tried to do something and failed miserably. Lord above, he wanted her. He couldn’t stop himself. It was wrong, but his body didn’t care. She stood stationary. Her breasts exposed to him, and her tiny sheer silk panties barely covered her mound. He took a hesitant step forward, trying to force his mind to control the terrible heat that spread in his body.

Keeping himself together wasn’t working. His palms began to sweat. Luna unfastened the top button on his jeans. His cock needed zero encouragement. His crazy penis had been prepared for her since he’d met her. Luna bent her head, and her cloud-like hair fell in waves over her shoulder. The locks slid over her breasts as he reached for her. Pulling her into his arms, he felt like someone else just took over.

Luna didn’t pull away from him. A part of him wanted her to, and another part insisted that she stay within his grasp. Gears drew her to his sweater and wished he was naked. Her soft curves against his frame felt so incredible, so right. His penis ached for liberation. A whisper of thought nagged at him. The only place he’d find relief and healing might be in her silken depth.

Since they were the same height, Gears put his hand on the back of her neck to bring her closer. He stared into her blue eyes as he slid his left hand to her breast to fondle one of her nipples. He squeezed the stiff peak between his fingers softly, then put his lips near her ear.

“I’m not normally like this. I like to think about what I’m doing.” His voice dropped lower. Senses awakened and pumped languorously through his blood like syrup.

“Feel me, Gears. Don’t be in your head. Be here.” Luna placed her palm over his heart. He felt like the organ beat into her hand. “Submit to love without thinking.”

Something wild and forbidden that he never let out of himself was ripping free. This was getting a little out of control. Who was he kidding? This was out of control like Mt. Vesuvius.

Gears leaned forward, and his mouth claimed hers.

One thought on “First Kiss: Grinding My Gears Off by C.M. Moore”